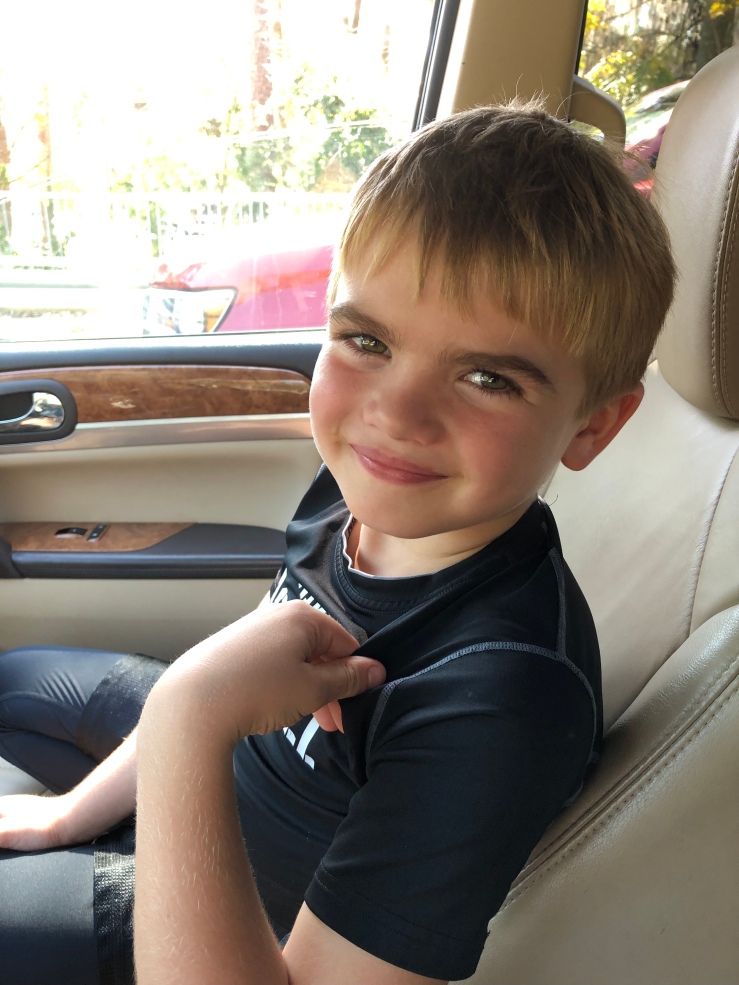 When you have multiple kids,  it’s nice to get a little time with just one.  Riley had a mid-morning dentist appointment today, then rode with me on a few errands.  It was a beautiful day so we drove around town with the windows down loving the way the “wind blew (our) hair”.  He wanted the radio turned off so we could just talk.  That’s code for “I have a lot to say and I want you to hear me”.  He doesn’t need a response most of the time but he does need validation that I’m listening, so he occasionally throws in a question or two.  He talked about WWE and all the different wrestlers, who I now know by name only through his action figures.  I don’t actually even need to watch Monday or Tuesday night wrestling.  Thankfully. I know the players, and their moves, and the question was which one was his favorite. Pffffftttt, that’s easy, John Cena, of course. He talked about playing tackle football this Fall which to him seems like an eternity away.  He talked about playing baseball soon, if I can get him on a team.  It seems they’re already all full!  He talked about the two of us going to the beach together “sometime”.  No one else is invited.  He likes to make funny faces and do funny things which ended up with me finding the Bangles “Walk Like an Egyptian” and letting him listen on my phone.  But the best thing he said, out of about a gazillion things he said was, “I like just hanging out with you Mom.  Just us.  We never really get to do that.”  Sadly, he’s right.  We normally have dad, or one of his brothers with us.   I am with Logan often by myself.  At two years old he’s not much of a conversationalist,  but he does talk a lot.  I just don’t understand about half of it.  His only question is “What’s that?” which comes up a lot.  Taylor and I get a lot of time alone while riding to and from school, besides he’s a teenager and feels no longing for time alone with his mom.  His only question is when he’s going to get ________________ (paid for doing something, something new he wants, sometime on xbox, a phone, etc.)  Answers: when he DOES something worth getting paid, when he earns money to buy it himself, never again,  probably never)  Nothing I want to hear.   Yes, I definitely need to make more time to spend with just Riley.  Besides, he tells me he’s my favorite.